On February 26 and 27, nearly 30 young leaders joined NCLD and our partners at Eye to Eye in Washington, DC, to advocate for change on behalf of the 1 in 5 with learning and attention issues. In just 48 hours, these advocates learned that their stories do hold power, that their voices can make change, and that they are part of a movement larger than themselves.

This group of young leaders worked with NCLD over the course of several months to learn about the federal policy process, how their story plays a vital role in effecting change, and top issues that NCLD is taking action on this year. They were ready to live the disability rights motto: “Nothing about us without us!”

During their two days on Capitol Hill, the group of advocates heard from several members of Congress. First, we were joined by Rep. Greg Stanton (D-AZ 9th District) and Rep. Bruce Westerman (R-AR 4th District), who spoke about recognizing the potential of individuals with learning and attention issues and fighting to provide what they need in our public schools.

Later, they had the distinct honor of meeting with Rep. John Lewis (D-GA 5th District), a legend of the civil rights movement, and Sen. Bob Casey (D-PA), a longtime champion of disability rights.

Each advocate also met with their own representative and senator or with their staff. In those meetings, advocates shared their experience with learning and attention issues and described how policymakers can push for changes that will improve outcomes for the 1 in 5. Specifically, advocates asked members of Congress to co-sponsor the Respond, Innovate, Succeed, and Empower (RISE) Act, to fully fund the Individuals with Disabilities Education Act (IDEA), and to join the Dyslexia Caucus and help raise awareness about these issues.

“This was the first time I met with my members of Congress. I didn’t know you could just set up a meeting, but now that I do, they will be hearing from me again!”

As they wrapped up their two days in Washington, DC, advocates celebrated with the entire disability community by attending a reception on Capitol Hill. There, they had the privilege of meeting another civil rights icon, Judy Heumann, an activist who was instrumental in the passage of critical regulations for Section 504 of the Rehabilitation Act of 1973.

After spending time with the leaders of tomorrow, NCLD is more hopeful than ever that the important advocacy work to improve outcomes for the 1 in 5 will continue. Not only do these young people have endless potential to achieve great things, but they have the passion and heart to lift others up and make change that will benefit everyone around them. We are proud to work with our partners at Eye to Eye and to continue to work alongside this incredible group of young people.

“Being with this group of young leaders to advocate on behalf of others with learning and attention issues has been the highlight of my year.”

If you are as inspired by these advocates as we are, it’s not too late to join the movement! We invite you to #StandwithLD. You can learn more about our advocacy, use our resources to tweet at members of Congress or send a letter on the RISE Act, or sign up for our newsletter to stay informed. No action is too small, and these young advocates are a testament that every voice matters! 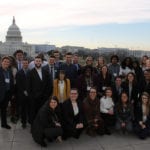 Advocates gathered in the morning to continue their training and learn what was in store for Day 1! 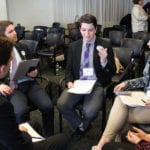 Advocates split into groups during the training workshop to practice and prepare for the meetings with members of Congress and staff. 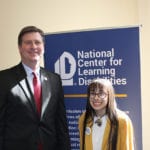 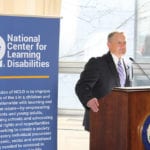 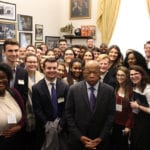 Advocates meet with Rep. John Lewis (GA-5) about his journey and the importance of speaking out for what is right. 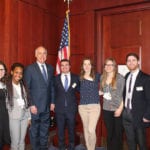 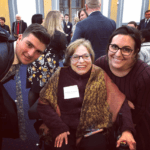 NCLD and Eye to Eye advocates Ben and Kelsey meet Judy Heumann and talk about her experiences in the disability rights movement.

Carrying out the NCLD mission to improve outcomes for the 1 in 5 individuals with learning and attention issues.