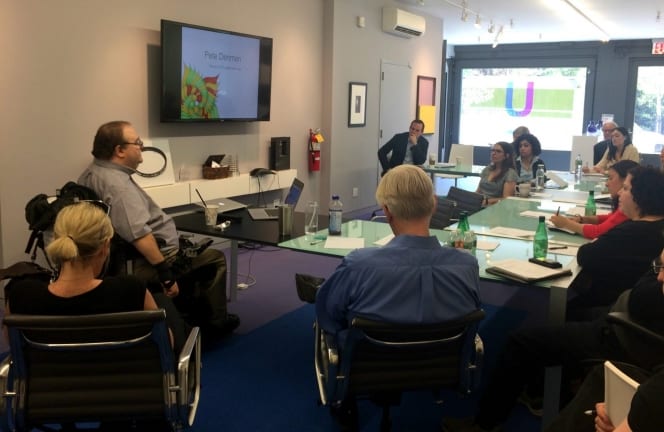 Last week NCLD, along with Understood and the Poses Family Foundation, hosted Pete Denman, a user experience designer at Intel and lead designer for Stephen Hawking’s speech software. Pete also happens to have dyslexia. Working on a team at Intel, Pete spent years evaluating, designing and testing an interface for Stephen allowing him to communicate. While Stephen was always the main focus, Intel wanted to address the needs of others who faced challenges interfacing their computer. Pete’s team learned a lot during the development and testing of Stephen’s interface and Intel developed a platform that let them quickly deploy changes to the software while they were building it. This style became the basis for the customization that makes this system so valuable to a larger audience. It struck me that educators experience this regularly. An approach that might work well for a student with a learning or attention issue that has been studied, refined and modified over many years might help inform best practice for all students, not just those with learning or attention issues. Pete also shared his story about his learning disability and how it gives him a personal connection to NCLD’s work. After Pete was diagnosed with LD in eighth grade, expectations for academic excellence were low and college seemed out of the question. “I felt ashamed of my learning disability. I wanted no one to know about it.” Then, when he was 20, Pete broke his neck in a diving accident and became quadriplegic. What once were low expectations turned into no expectations. “At this point, all that was expected of me was to breathe.” Pete lost interest in life after his accident. It wasn’t until his mother talked him into auditing an art history course that his perspective started to change. Pete decided to take the course’s final exam to see how much he had learned. Because of his physical disability, the school provided Pete with accommodations he’d never gotten in elementary or high school for his learning disability. He had the test read to him and he gave his answers out loud. He passed the test with flying colors. His physical disability had made it necessary for him to request accommodations he needed for his learning disability. After discovering accommodations, he created a new path for himself. It wasn’t until he started work at Intel that he finally started to tell people about his dyslexia. “I was able to hide the disability that I was tremendously ashamed of behind my physical disability. It wasn’t until I met others with learning disabilities that I was willing to out myself. To this day I still struggle with acceptance.” Pete’s story reminded me that much stigma still exists for those who learn differently. If Pete had not been injured he may have never discovered his true talents because of how ashamed he was of his dyslexia. Pete should have never felt shame for learning differently, just as he never felt shame for being in a wheelchair. Today, Pete speaks around the world about his groundbreaking work at Intel, as an advocate for those in wheelchairs and by being open about his dyslexia. We have a long way to go when it comes to changing the perception of learning and attention issues so that every child can follow in the path of people like Pete Denman. Natalie Tamburello is NCLD’s Learning Resources & Research Associate.