FAQ: What is the ADA and Who does it Help? 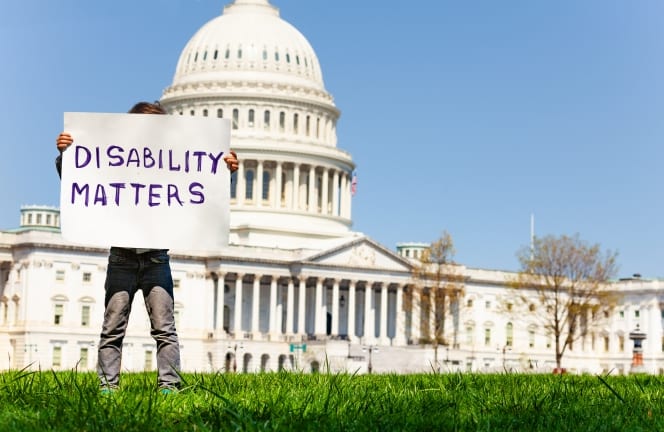 Q. What is the Americans with Disabilities Act?

The Americans with Disabilities Act (ADA) protects individuals with disabilities from discrimination in many settings. The ADA was originally passed in 1990 and was the first major federal civil rights law protecting individuals with disabilities. In 2008, Congress updated the ADA by passing the Americans with Disabilities Act Amendments Act (ADAAA). In this article, we’ll use “ADA” to refer to the law generally, including the amendments made in 2008.

The ADA applies to:

Q. Who does the ADA protect?

The ADA originally defined a person with a disability as an individual:

The definition of a “major life activity” included but was not limited to: caring for oneself, performing manual tasks, seeing, hearing, speaking, breathing, learning, and working.
The Americans with Disabilities Act Amendments Act (ADAAA), passed in 2008, added to the list of “major life activities” that were covered under the definition of “disability.”  The following activities were added: eating, sleeping, walking, standing, lifting, bending, reading, concentrating, thinking, and communicating.

Q. How do you prove a disability under the ADA?

The law also makes clear that, when determining whether an individual has a disability that “substantially limits” their activities, you must NOT consider any mitigating measures. The assistive technology, devices, accommodations, medications, or other modifications received cannot factor into the determination.

Example One:  A student with a learning  disability receives informal accommodations to be successful in school. The student can still benefit from the ADA without being penalized and needing to show he/she would struggle without the accommodation.

Example Two: A school may NOT consider the fact that a student with ADHD takes medication that helps his condition when determining if he qualifies under the law.

Q. How does the ADA affect students in school?

The ADA supports students with disabilities in conjunction with other disability laws that you may have heard of including the Individuals with Disabilities Education Act (IDEA) and Section 504 of the Rehabilitation Act (Section 504). While there are some similarities, there are important differences between these laws.

The ADA requires that reasonable accommodations be provided to students with disabilities who meet the requirements, even if those students are not eligible for services under IDEA. A school is required to provide a student with those accommodations that help him or her learn most effectively.

Both IDEA and Section 504 hold schools responsible for providing a free, appropriate public education to all children, but the ADA does not. The ADA provides fewer protections that IDEA but is available to many more students.  In fact, students not eligible for IDEA may still be eligible for Section 504 protections under the ADA.

The ADA and Section 504 apply to all public and private K-12 schools, colleges, universities, and testing agencies. However, the protections do not extend to organizations run by religious groups.
For more information about the ADA and how it works alongside Section 504 of the Rehabilitation Act to support students with LD, see our Parent Advocacy Brief: Understanding the Americans With Disabilities Act Amendments Act and Section 504 or see our short article on the ADA and Section 504.

Q. How does the ADA affect people with disabilities in the workplace?

A “qualified individual with disabilities” is an employee or job applicant who meets all legitimate skill, experience, education and other requirements of a position and can perform the essential functions of the position with or without reasonable accommodation*.

An employer may not ask about a disability, with one exception. If an employer has affirmative action requirements as part of a federal contract, a job applicant may be asked to “self-identify.” However, the employer must keep all information regarding disabilities in a separate, confidential file apart from regular personnel files.

If an employee requires accommodations in order to perform a job, he or she must disclose information about the disability and the need for specific accommodations to the employer. Employers must provide reasonable accommodations, but it is not required to make an accommodation that would prove an “undue hardship**.”

*A reasonable accommodation is any change to the application or hiring process, to the job, to the way the job is done, or the work environment that allows a person with a disability who is qualified for the job to perform the essential functions of that job and enjoy equal employment opportunities. Accommodations are considered “reasonable” if they do not create an undue hardship or a direct threat.

**Undue hardship is defined as an “action requiring significant difficulty or expense” when considered in light of a number of factors. These factors include the nature and cost of the accommodation in relation to the size, resources, nature, and structure of the employer’s operation.