The 30th Mark - A Look at the History of the Americans with Disabilities Act. 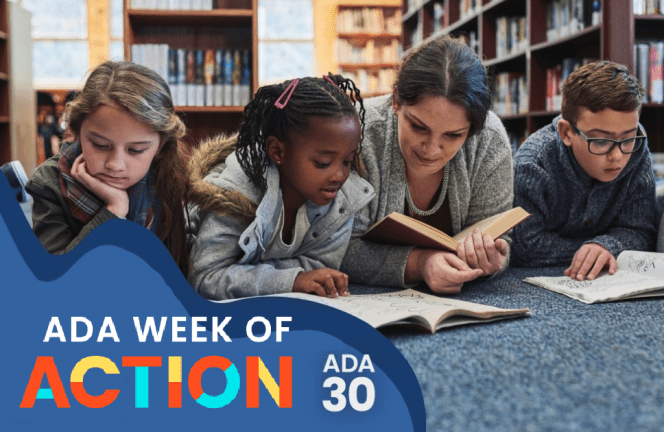 30 years ago, the Americans with Disabilities Act (ADA) was signed into law, protecting the civil rights of those with disabilities. In celebration of its history and the legacies of those who fought for its existence, scroll below to explore an interactive timeline on the history of the ADA.

The Social Security Amendments of 1960 were signed into law.

These amendments included provisions that, for the first time ever, allowed those under 50 with disabilities to receive Social Security Disability Insurance benefits.

President Lyndon B. Johnson signed this Act into law, which banned segregation in public places and employment discrimination based on race, color, sex, religion, or national origin. Though this law did not directly address disabilities, it served as a foundational piece of civil rights legislation. Disability advocates built off the language used in the Civil Rights Act for later legislation concerning civil rights for those with disabilities.

The Rehabilitation Act (1973) was signed into law.

Section 504 of The Rehabilitation Act banned discrimination on the basis of disability for organizations that received Federal funds. Modeled after the Civil Rights Act (1964), the law not only brought significant legal change, but it also served as a public acknowledgement of the discrimination and prejudice expressed towards those with disabilities in the United States.

The Individuals with Disabilities Act (IDEA) was signed into law.

Originally called The Education of all Handicapped Children Act (1975), this act required that all eligible children with disabilities must receive a “free appropriate public education” in the “least restrictive setting.” It is perhaps the law discussed most often with regard to learning disabilities.

Led by Judy Heumann, the San Francisco sit-in was the longest occupation of a federal building in U.S. history. Protestors occupied the regional office for the Department of Health, Education, and Welfare (HEW), demanding that the newly appointed HEW Secretary, Joseph Califano, set binding regulations for 504. Section 504 of the The Rehabilitation Act (1973) said that no person should be “excluded from the participation in, be denied the benefits of, or be subjected to discrimination” under any program receiving Federal dollars. This was a huge step for the disability community, but some activists felt that the language of the law was too broad, which is why they needed HEW to issue clarifying regulations. Companion protests took place across the country.

The Civil Rights Restoration Act of 1987 becomes law, despite a Presidential veto.

In the first major coalition movement involving the disability community, disability activists worked with those representing women’s and minority groups in order to advocate for The Civil Rights Restoration Act. The Act increased the reach of anti-discrimination laws for organizations receiving Federal funding.

Congressman Major Owens established the Task Force in order to educate Congress and the public on discrimination against those with disabilities. The Task Force was made up of civilians and received no Federal funding. It was Co-Chaired by Justin Dart, Jr, renowned human rights activist and Dr. Elizabeth M. Boggs, an activist and academic involved with the disability rights movement.

The Congressional Task Force on the Rights and Empowerment of Americans with Disabilities was created.

Members of ADAPT (Americans Disabled for Accessible Public Transit) shed their mobility aids and crawled up the Capital Steps in the National Mall in order to pressure Congress to pass the Americans with Disabilities Act. The protest is remembered as a landmark day for disability activism.

The Americans with Disabilities Act (1990) was signed into law by President George H.W. Bush.

The ADA was meant to be an equal opportunity law for people with disabilities. Modeled after the Civil Rights Act (1964), it affirms and protects the rights of those with disabilities in regards to employment, government services, and other aspects of public life.

The Supreme Court announced three decisions, known as the “Sutton Trilogy,” that limited the scope of the ADA.

When the Supreme Court ruled in Sutton v United Airlines, Murphy v United Parcel Service, and Albertson’s Inc. v Kirkingburg, they narrowed the scope of the ADA, saying that those who use “mitigating measures” were not protected. These rulings would later lead to the ADA Amendments Act, as lawmakers realized that the intended purpose of the ADA was being undermined by judicial action. On the same day that rulings for the Sutton Trilogy were announced, the Supreme Court ruled in Olmstead v L.C., which symbolized a victory for civil rights. In this case, the Supreme Court ruled that integration when possible was required in services for those with disabilities.

The ADA Amendments Act (ADAAA) was signed into law.

Congress passed the ADAAA to counter some Supreme Court decisions that were believed to have limited the scope of the ADA and narrowed the definition of “disability” beyond the original Congressional intent. Once the ADAAA was passed, the U.S. Equal Employment Opportunity Commission updated its regulations regarding disabilities. Now, the definition of “disability” under the law is meant to be as broad as possible.

The Consortium for Citizens with Disabilities and Allies sent a letter to Congress opposing The ADA Education and Reform Act.

236 member organizations  of the Consortium for Citizens with Disabilities and Allies (including NCLD) sent an open letter to Congress opposing the ADA Education and Reform Act. Though the bill passed in the House, it failed in the Senate. The ADA ERA Act would have removed incentives for businesses to comply with ADA guidelines. This serves as a sobering reminder that the battle for civil rights protections is far from over.

Kirsten Mettler is a policy intern at NCLD and a rising sophomore at Stanford University.