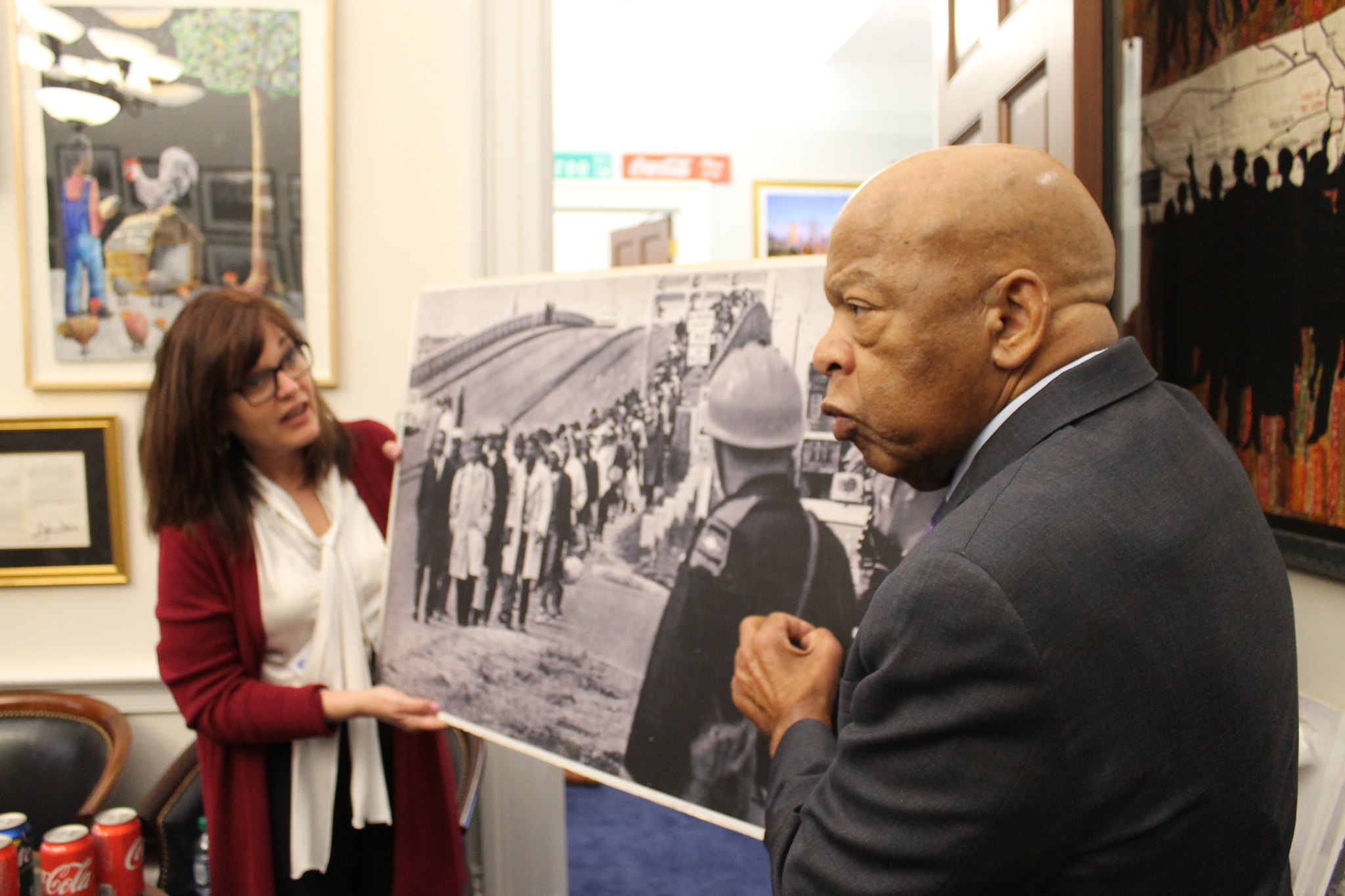 Congressman John Lewis (D-GA) speaks about his experiences during the Civil Rights Movement to the NCLD Young Adult Leadership Council with other advocates.

“Democracy cannot succeed unless those who express their choice are prepared to choose wisely. The real safeguard of democracy, therefore, is education.”

When President Roosevelt made this statement to commemorate American Education Week in 1938, he had already grappled for nearly two decades with a disability that had left him paralyzed from the hips down. He spoke as someone who saw how his own education contributed both to his empowered, self-determined state and to his confidence in the longevity of the democratic principles he sought to defend.

This isn’t just a nice historical anecdote. It’s a present-day challenge to claim rights and improve opportunities for traditionally marginalized groups (racial and ethnic minorities, lower-income individuals, LGBTQ individuals, and individuals with disabilities) in our society today. Education, and specifically a strong civics education, not only safeguards our democratic institutions, but also empowers these groups to use institutional levers to advance social justice. In our democratic system, individuals do this through the learning and practice of speaking out, debating, discussing, empathizing, organizing, nonviolently protesting, serving, and, ultimately, voting.

These civic actions have contributed to one of the least talked about but most successful civil rights movements of modern times: the disability rights movement. It was FDR’s distant cousin, President Teddy Roosevelt, who cruelly advocated for eliminating individuals with disabilities from society. The disability rights movement fought for and won a right to existence and then legal protections—including the Individuals with Disabilities Education Act (IDEA), the Americans with Disabilities Act (ADA), the Rehabilitation Act, and other bipartisan statutes—that aimed to safeguard those rights and advance full inclusion in society. These historical gains are not and were never inevitable; they were gained through civic action.

Empowering that action isn’t a function of groups simply getting more education and mastering literacy and mathematics, which, along with science, have come to reflect the core focus disciplines. We often hear about achievement gaps in these academic subjects. But there are other gaps as well: Individuals with disabilities—and other traditionally disadvantaged subgroups—are also significantly less likely to vote and to engage in other civic behaviors. That fact underscores the essential need for a strong civics education for its own merits. When implemented effectively, it helps individuals understand an arc of history and how to effectively and constructively leverage their power in a democratic system to, as Dr. Martin Luther King Jr. advocated, bend that arc toward justice.

Effective civics education isn’t just about learning historical facts. It includes immersive and integrated experiences with explicit instruction in civics, discussion of current events, applied learning activities like service learning, democratic participation, and school governance. While these actions can have benefits for all students, they are particularly powerful for students with disabilities who need skills to advocate for themselves in school and later in life, especially after they leave K–12 education and the supports provided by their families, IDEA, and dedicated special educators and other staff.

When students with disabilities are explicitly taught and experience the skills and dispositions associated with high-quality civics education, they show greater capacity for self-advocacy and self-determination. They are more capable of taking empowered actions regarding their learning and lives. We help students with disabilities develop these capacities when we change the national conversation, speak about access to high-quality civics education as a civil rights issue, and explicitly integrate into civics education the essential skills and dispositions that traditionally disadvantaged groups need to succeed. This takes place when educators, communities, parents, and students’ peers:

These types of inclusive school experiences don’t happen without explicit planning and implementation. When the Founding Fathers lay the groundwork for our system of public education, they ultimately established opportunities for all of us to come together as equal citizens. Because this democratic experiment is far from over—and indeed may never be over—it is more important than ever to protect and expand the civic mission of schools for all students and especially for those so often pushed to the margins of our society. 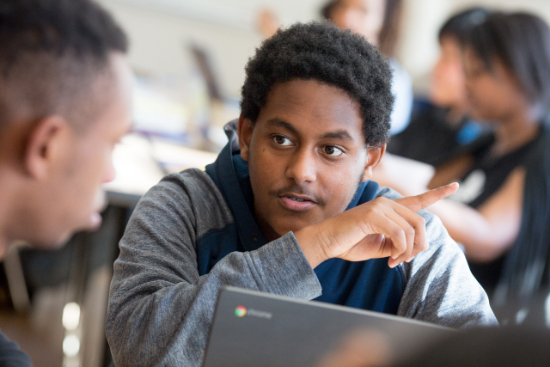 High school students often have skewed visions of what college demands. I still vividly remember visiting my friend, Nick, after my first semester of college. Nick, who was a high school senior at the time, had a burning question he’d clearly been wrestling with — a problem that he seemed to feel would sink him in college: “How were you able to pay for and do laundry?” he nervously asked. (We’ll leave for a different blog post the embarrassing fact that neither Nick nor I had done our own laundry in high school.) Seeing his anxiety, I didn’t know how to break it to my friend that finding three quarters for the machine and learning to separate whites from colors were not the biggest issues I was facing. No, the biggest challenge I had was explaining to my microeconomics professor why I was struggling and that I needed help.

This week, we are proud to share two briefs for higher ed faculty and administrators, in partnership with the American Council on Education and the American Association of University Administrators. These resources are aimed at addressing the skills and capacities that would have helped me navigate challenges with my professor (but perhaps not my laundry).

With the emphasis on GPAs, SATs, ACTs, and applications during the senior year of high school, we often forget that the transition from high school to postsecondary life is an enormous leap and rite of passage for young adults — it’s beyond just academics. Students need to quickly begin making independent decisions for themselves in new ways, budgeting their time, balancing social and academic lives with greater independence, and taking greater responsibility for their futures. Self-advocacy skills (the skills to know yourself and your rights, and the ability to communicate on your own behalf) and self-determination (the capacity to be the primary agent in one’s learning and life) aren’t simply nice skills to have: They become the oxygen necessary to survive and thrive.

Students. Students must recognize that skills in the areas of self-advocacy and self-determination are as important as anything they will learn in their coursework — or maybe even more important. Developing these skills will allow them to get more out of their coursework. So they must learn to approach challenges with a growth mindset, framing setbacks and obstacles as learning opportunities.

Faculty. Faculty must come to see the advancement of their discipline as being incumbent on mentoring and supporting students as they develop these skills. There are countless examples of leaders with disabilities in nearly every discipline demonstrating these skills and capacities and, in the process, contributing new perspectives that help to address entrenched problems.

Administrators. Administrators must recognize that the success of their students in exercising self-advocacy skills and of their faculty in supporting them isn’t just the purview of those individuals, but a function of the environment they help establish. Indeed, even the best intentions and efforts among students and faculty could fail in the face of department- and institution-wide cultures that don’t effectively support student needs.

The last several decades have seen great advances in access to our institutions of higher education for racial minorities, disabled students, and other traditionally disadvantaged groups.  This progress has neither been inevitable nor linear—it’s been borne of specific choices and initiatives of groups and individuals who have embraced self-advocacy skills and self-determination on behalf of themselves and their communities. It is in this spirit that we invite students, faculty, and university administrators to take up this new torch for expanding opportunity and access at our institutions of higher education.